A Tribute to Michael Jackson – A Year ago today I was sitting in my car on my lunch break enjoying some time out of the office when I first heard the unconfirmed news report that Michael Jackson was dead. Needless to say I was in shock at the news. There is no doubt that he is/was one of the greatest entertainers and musical artists of the 20th century. Personally, I have never been a huge fan of the King of Pop, but on some level I admired the star and his music all the same. Perhaps I am a fan of “Off The Wall Michael” or “Thriller Michael”, beyond that point he started to lose me a little with the plastic surgeries as well as some of the other bizarre stuff. I say some of the bizarre stuff because on the whole I am often a big fan of bizarre stuff. I also tried not to get all caught up in the child molestation stuff either. I just wanted to remember Michael as he was when I was a child and a teenager, both when he was still with us and after his passing a year ago this day. That is the Michael I am remembering and paying tribute to with today’s daily design. 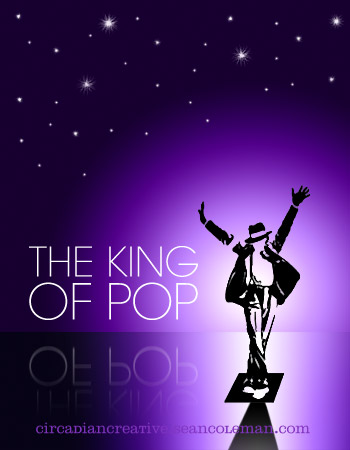 I tried to keep the imagery very basic but as I started working I had to create the impression of a glossy stage and stars above. The silhouette image of Michael was taken form a desktop wall paper image I found online. I liked this image as I felt it reflected the Michael that I admire. It also gives me the feeling that the physical Michael is gone but his impression or spirit is still on stage in the heart and mind of popular culture. I chose deep purple as the dominating background color as it is the color of royalty. The center of light behind the image of Michael acts as a spotlight but also reiterates that spiritual theme of crossing over. That’s it. Hope you enjoy!

Reminders: I am always accepting submissions for words or phrases. If you would like to see me design something around yours, submit it in the comments area below. Also, If you are on Facebook please add Circadian Creative’s Facebook page to your “liked” pages. If you log into Facebook and do a search on Circadian Creative it will come up at the top of the list. I update the page daily after each post here and I have also archived the daily designs by month in the photo section.

See you all tomorrow.
Sean

adjective - Physiology (of biological processes) recurring naturally on a twenty-four-hour cycle, even in the absence of light fluctuations : a circadian rhythm.
ORIGIN 1950s: formed irregularly from Latin circa ‘around’ + dies ‘day.’

Photoshop and Macintosh guru, Scott Kelby with Sean Coleman at a 2007 Photoshop seminar in Washington D.C.

Promote Your Page Too